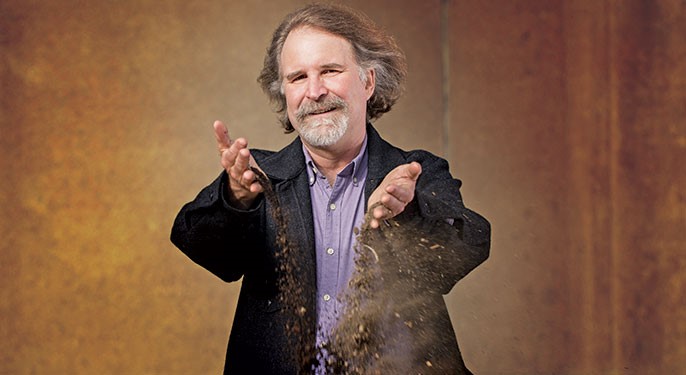 Our 8 Billion Angels film team traveled to Cambridge Massachusetts in March 2017 to meet with and interview David Montgomery, professor of Earth and Space Sciences at the University of Washington in Seattle, where he leads the Geomorphological Research Group and is a member of the Quaternary Research Center.

David is considered a leading expert in the field of soil. He an author of numerous books such as Dirt; The Erosion of Civilizations and his recent publication Growing A Revolution; Bringing Our Soil Back to Life.

In our investigation of our planet and our interview of David we tried to understand the extent of human exploitation of our land for growing our crops, David cited multiple examples of civilizations over history that had collapsed because farmers were not good stewards of the soil with which they tilled their crops, eventually eroding the land or exhausting its fertility. Because of the lack of mobility to transport vast quantities of resources, unlike today with the advent of trains, trucks, shipping, and the lack of artificial fertilizers from fossil fuels these former civilizations ended up collapsing.

Since World War II the earth has lost 1/3 of its soil to erosion. Soil fertility has also lost 1/2 its carbon, a main ingredient in plant growth. We are literally stripping our bank account of fertile soil faster than it can regenerate itself through natural processes. How this current condition of our land starkly differs from the past is it is no longer isolated to a specific civilization at a specific location, but happening around the entire globe with very little untouched fertile land remaining.

David indicated that at the pace of population growth and the rate we are plundering our soils to feed an ever growing planet of people, we will at some point in the not too distant future run out of useful soil and suffer significant food shortages around the world. Unless there is massive change in the way we tend our soils coupled with reducing the number of mouths we feed, history shall perhaps repeat itself but with the exception that this time around it will be at a global scale.